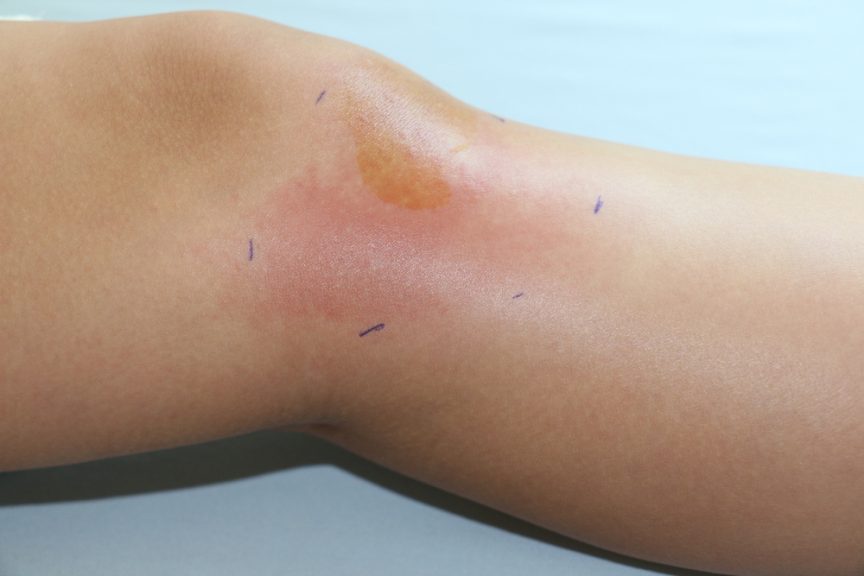 Cellulitis is a fairly common condition among people suffering from lymphedema. It involves infection of the internal, living layer of the skin, known as the dermis—and the tissue immediately beneath the skin; called subcutaneous tissue—in affected areas, such as the upper arm, or more commonly, the legs. Lymphedema and cellulitis enjoy an unfortunate relationship; cellulitis can trigger new instances of lymphedema in underlying tissues, while existing lymphedema may precipitate cellulitis where none previously existed.

Cellulitis is described as an acute bacterial infection of the dermal and subcutaneous layers of the skin. Patients typically experience redness, swelling, warmth, and tenderness in the affected area. The patient may exhibit signs of fever, but this symptom can be misleading. One study concluded that only about one-quarter of patients reporting to the hospital for treatment of cellulitis had a fever at the time of presentation.

Unfortunately, many other skin diseases may mimic cellulitis, so it may be difficult for your healthcare provider to diagnose, at least initially, if you have not previously been diagnosed with lymphedema. Among lymphedema patients, however, doctors are more likely to suspect cellulitis as an explanation for the sudden onset of symptoms such as redness, heat, and swelling.

If you experience symptoms that you believe may indicate cellulitis, seek immediate medical attention. Symptoms vary, but the underlying infection is potentially serious. In extreme cases, patients may experience dangerously low blood pressure, racing heart, and general malaise, as toxins from the invading bacteria take a toll on health. Some patients report feeling as if they have a “flu-like” illness before seeking attention.

If your healthcare professional determines that you are in fact suffering from lymphedema-related cellulitis, he or she will probably suggest delaying any additional therapies, which might further aggravate the skin. Examples include decongestive lymphatic therapy (massage). Your doctor will probably prescribe an appropriate antibiotic to treat the underlying infection. A skin biopsy may be required to make a definitive diagnosis of cellulitis, but is not always necessary.

Research suggests that aggressive treatment for lymphedema, including decongestive lymphatic therapy, and the wearing of medical-grade compression garments, as well as attentive skincare, may help to reduce the likelihood of developing cellulitis related to lymphedema.

Unfortunately, a patient with lymphedema who has experienced a bout of cellulitis is statistically somewhat more likely to experience a recurrence of cellulitis. In some instances, high-risk patients may be prescribed a preventive, maintenance dose of an antibiotic, such as penicillin.

Although a current diagnosis of lymphedema is already the strongest risk factor for cellulitis, another factor known to increase one’s chance of developing this condition is obesity. Beyond these two factors, anything that damages the integrity of the skin is also associated with increased risk.

This is why paying attention to the health of one’s skin is crucial for lymphedema patients. Even small cuts, bites, injections, or other breaks in the skin can serve as a route for bacterial infection. They should be scrupulously avoided. Even untreated athlete’s foot can increase risk. Not surprisingly, leg ulcers are a common source of infection, which can lead to cellulitis.

Unfortunately, the relationship between lymphedema and cellulitis has been described as a “vicious cycle,” in recognition of the fact that one often precipitates the other. Careful attention to lymphedema management—including appropriate skincare—is among the best strategies for preventing cellulitis or its recurrence.