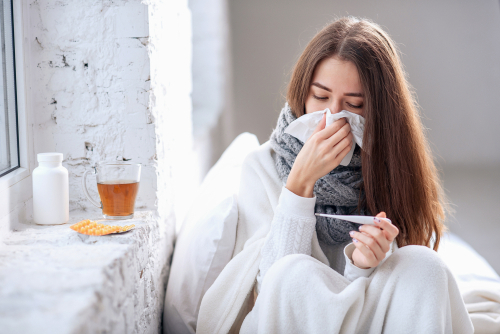 The influenza virus is not a singular virus. Rather, it is a family of virulent, always mutating viruses, capable of doing extreme harm, depending on the patient, the strain, and even which variants happen to be circulating in the general population during a given flu season. Most people are aware that the annual spike in flu cases in the Northern Hemisphere, known as “flu season,” happens to correspond with the colder, darker months of fall and winter. While flu in the summer is not unheard of, it remains rare.

This seasonality has prompted some researchers, including James Cannell M.D., to propose that susceptibility to the flu rises dramatically in winter months due to falling levels of vitamin D in the body. Vitamin D is generated within the skin through the action of sufficiently strong ultraviolet light from the sun striking the skin.

Flu Season is Upon Us

In late fall and winter, the sunlight that reaches us is simply too weak to spark this remarkable natural synthesis. As a result, in winter many people suffer from abnormally low levels of this multi-faceted vitamin (it’s actually a hormone). Given that vitamin D plays an important (previously unrecognized) role within the immune system, it makes sense that as sunlight dims, and vitamin D levels fall, we may become more susceptible to the flu virus.

This theory has never been proven, and it remains controversial. But it underscores one fact: Flu is a seasonal phenomenon. Cases skyrocket in winter. And it’s capable of causing serious illness, and even death. Experts are predicting another bad year for flu cases, again this year.

In recent winters, hospital intensive care units have been inundated with flu victims, many of whom struggled for their lives. While the flu vaccine is never 100% effective, nor even 90% or 80% effective for that matter, experts strongly agree that as many people as possible should get the annual vaccine. That’s because, while it may not offer ironclad protection, you’re likely to get at least some benefit from it, even if you subsequently contract the flu.

You’ll need a new one every year, ideally in early fall, because the mixture of anticipated culprit viruses changes somewhat every year. Since experts can never be entirely certain which pathogens will be most likely to circulate, they are forced to operate from what can best be described as their best, educated guesses. In any event, even if you subsequently contract the flu, experts note that the severity and duration of your symptoms are likely to be far less than if you had not received the immunization.

Of course, many healthy people worry about possible flu vaccine side effects. At worst, say experts, you may experience some temporary soreness or swelling at the injection site. This will typically go away within a day or two. Many people experience no side effects at all. Others may feel a slight achiness or loss of energy, similar to a mild, brief cold. A small price to pay for avoiding the intensive care unit, surely.

Of course, if you have lymphedema of the arm(s) you will have been counseled that it is crucial for you to protect your affected arm(s) from any injuries. Potential injuries include everything from cuts and scrapes to needles for immunizations or blood draws.

Even the pinprick of a flu vaccine needle could stress the already-stressed tissues of an arm with lymphedema, so you must warn your provider about your condition if it is not obvious, or if the provider does not appear to understand the importance of giving an injection in a lymphedema arm.

Patients who happen to suffer from lymphedema in both arms will need to ask for an injection in an alternate site, such as a hip. With a little planning and patience, you should be able to protect yourself from the annual flu while also protecting your tender, lymphedema-affected arm(s).

Ongoing research, by the National Center for Health Statistics, Centers for Disease Control and Prevention, indicates that Americans are consistently undernourished in terms of vitamin D status. Most Americans’ levels fall within a range that is considered insufficient or deficient. Given that vitamin D is linked not only to bone health but to healthy immune system function, it makes sense to pay attention to one’s own vitamin D status.

If you are concerned about your own vitamin D status during the winter, ask your doctor about possible dietary supplementation. Or consider choosing foods, such as wild salmon, tuna or mackerel, that are natural sources of the sunshine vitamin. In most countries, whole milk contains supplemental vitamin D and may serve as another dietary source of this important nutrient. Other foods featuring fortified or natural vitamin D include some cereals and orange juice, beef liver, cheese, and egg yolks.